I believe the town of Bray and its people were truly blessed and impacted last night by the prayers of the people of Liberty. It was the third night of our month long focus on prayer launching us as a church into 2013 and the first of these prayer nights to be hosted by Liberty in Bray. 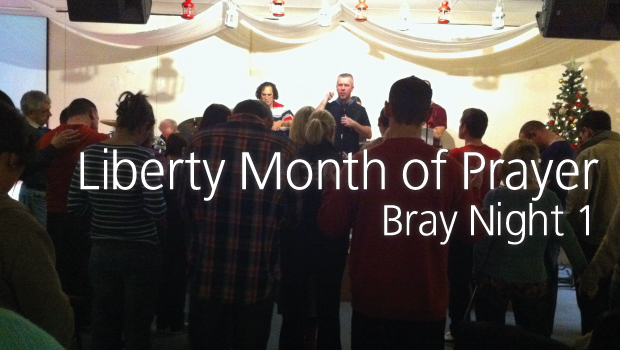 We opened with a time of worshiping the Lord together in song, focussing our thoughts and attention on him and preparing our hearts to hear from and to speak to the Lord.
Noel then gathered everyone there into clusters to pray for specific groups of people. People with a passion for ministering to and reaching out to kids grouped together to pray for the kids of Bray. Those with a passion for young people did the same. Groups also formed to pray for women, for men, and for those who minister on worship teams.
I walked around the groups as they prayed joining in and listening to the prayers coming from the groups. Their prayers carried a passion and a confidence that that really struck me and left me convinced that they were more that words, aspirations, or wishful thinking. They were prayers of genuine faith birthed by the Spirit of God; the kind of prayers that God delights to answer.

Over the last number of months in the weekly prayer meeting in Bray we feel that the Lord has been telling us that Liberty Church Bray will be a place where the Father will draw and welcome his prodigal children home. We

took some time last night to pray together that Liberty would be a place where those who have known God but become distant from Him would return to close relationship with Him. That they would know what it is to return to the Father and find Him running out to meet them with open arms to welcome them home.

At the end of the night Noel read from Isaiah 61 and we prayed for one another that we would know his spirit working in and through each of us in Bray in the way described in this scripture:

The Spirit of the Lord GOD is upon me, because the LORD has anointed me to bring good news to the poor; he has sent me to bind up the brokenhearted, to proclaim liberty to the captives, and the opening of the prison to those who are bound; to proclaim the year of the LORD’s favour, and the day of vengeance of our God; to comfort all who mourn; to grant to those who mourn in Zion— to give them a beautiful headdress instead of ashes, the oil of gladness instead of mourning, the garment of praise instead of a faint spirit; that they may be called oaks of righteousness, the planting of the LORD, that he may be glorified. They shall build up the ancient ruins; they shall raise up the former devastations; they shall repair the ruined cities, the devastations of many generations. (Isaiah 61:1-4 ESV)

Thanks to everyone who came out from Bray, Clondalkin and the City last night. It was incredibly encouraging to see us pray as one Church for the people of Bray. Last night Bray had a group of saints interceding on its behalf; praying with authority for the kingdom of God to come in Bray. God is really moving here and I look forward to seeing in the physical the effects of what was accomplished in the spiritual last night.
If you were there please feel free to share your experience in the comments below.

P.S. A man from Bray gave his life to the Lord in the meeting last night! Praise God 🙂

Liberty Church is Registered with the Charities Regulator.

We're not around right now. But you can send us an email and we'll get back to you, asap.

We use cookies on our website to give you the most relevant experience by remembering your preferences and repeat visits. By clicking “Accept All”, you consent to the use of ALL the cookies. However, you may visit "Cookie Settings" to provide a controlled consent.
Cookie SettingsAccept All
Manage consent

This website uses cookies to improve your experience while you navigate through the website. Out of these, the cookies that are categorized as necessary are stored on your browser as they are essential for the working of basic functionalities of the website. We also use third-party cookies that help us analyze and understand how you use this website. These cookies will be stored in your browser only with your consent. You also have the option to opt-out of these cookies. But opting out of some of these cookies may affect your browsing experience.
Necessary Always Enabled
Necessary cookies are absolutely essential for the website to function properly. These cookies ensure basic functionalities and security features of the website, anonymously.
Functional
Functional cookies help to perform certain functionalities like sharing the content of the website on social media platforms, collect feedbacks, and other third-party features.
Performance
Performance cookies are used to understand and analyze the key performance indexes of the website which helps in delivering a better user experience for the visitors.
Analytics
Analytical cookies are used to understand how visitors interact with the website. These cookies help provide information on metrics the number of visitors, bounce rate, traffic source, etc.
Advertisement
Advertisement cookies are used to provide visitors with relevant ads and marketing campaigns. These cookies track visitors across websites and collect information to provide customized ads.
Others
Other uncategorized cookies are those that are being analyzed and have not been classified into a category as yet.
SAVE & ACCEPT
All night prayer – reviewBlog 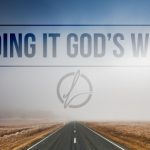